Film / Splendor in the Grass 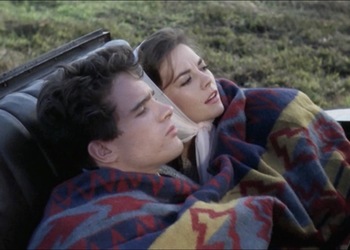 Now that's a handsome couple.
"Though nothing can bring back the hour
Of splendour in the grass, of glory in the flower;
We will grieve not, rather find
Strength in what remains behind."
—William Wordsworth, Ode: Intimations of Immortality from Recollections of Early Childhood
Advertisement:

Splendor in the Grass is a 1961 romantic drama film directed by Elia Kazan and starring Natalie Wood and Warren Beatty.

Deanie Loomis (Wood) and Bud Stamper (Beatty) are high-school sweethearts in a small Kansas town in 1928. Bud's oilman father, Ace (Pat Hingle), is the wealthiest man in town, while Deanie's parents are shopkeepers. The real conflict between the two is not the class difference, however, but their intense desire to have sex with each other, and the social guidelines in small-town America in The Roaring '20s that won't permit them to consummate their relationship. Bud and Deanie's sexual frustration subsequently impacts their lives and the lives of several people around them.

Splendor in the Grass marked Wood's arrival as a serious adult actress after starting out as a child actress and transitioning to "teenager" roles in films like Rebel Without a Cause; her performance earned her an Academy Award nomination for Best Actress. (William Inge was also nominated, and won, for his original screenplay.) This film is also notable as Warren Beatty's film debut; he would become one of the cinematic heartthrobs of the '60s and '70s.