Be a Whore to Get Your Man 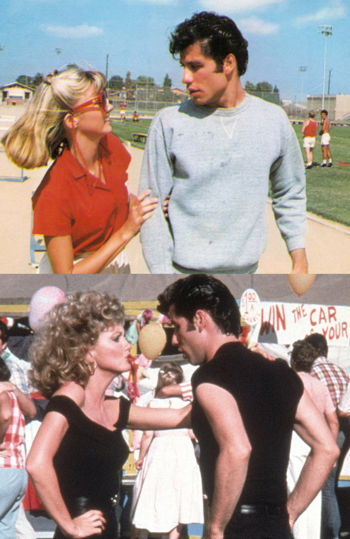 From bobby-soxer to body rocker, all for love.
"In Grease, what did Sandy do to get Danny Zuko? She had to ditch the poodle skirt and slap on a catsuit. In short, she had to dress like a 'ho'."
— Kurt, Glee
Advertisement:

A Hard Truth Aesop which often goes hand-in-hand with Unnecessary Makeover. The Ingenue learns to dress and act in an overtly-sexual manner in order to snag her man, usually with the help of her "friends". Heaven forbid she should pick someone who likes her the way she is. Fridge Logic wonders, will she have to keep up her new sexy look and attitude forever, and will she resent it?

You will not often see this trope in shows produced before the 1960s or so, except in cases where the woman is already married to the man whose interest she wants to (re)acquire. The common trope before the 1960s was that men would happily tumble into bed with women who said "yes" but would only marry the woman who said "no". This makes Grease, set in the 1950s, somewhat anachronistic, as a real-life Sandy would have been seen in her time frame as doing exactly the wrong thing to catch Danny — unless she only wanted to catch him for the night. As the bad boy, however, Danny is intentionally at odds with the conventional morality of his time.

Subtrope to Changing Yourself For Love.

Example of:
She Cleans Up Nicely