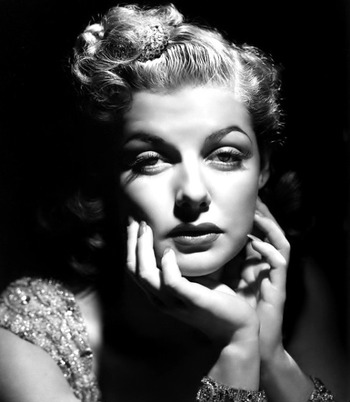 "That's the only thing I ever wanted to be: a good actress. But I suppose I can't get away from that Ann Sheridan Oomph thing. I wish I could."
Advertisement:

Ann Sheridan (February 21, 1915 – January 21, 1967) was an American actress famous during The Golden Age of Hollywood. She also had the distinction of being a red-headed pin-up girl among the likes of Rita Hayworth and Betty Grable.

Born Clara Lou Sheridan in Denton, Texas, she first came to Hollywood at the young age of 18 after winning a beauty contest. Paramount was the studio that discovered her, but after a year and more than two dozen films they still hadn't managed to put her to any good use despite all her talent, sex appeal, glamour, and star qualities. Ann signed with Warner Bros. in 1936, and her Star-Making Role came two years later in Angels with Dirty Faces, opposite James Cagney. She became known as Warner's "Oomph Girl", an appellation which she purportedly detested.

She excelled in drama, had great timing for comedy, and was adept at anything the studio threw at her. Yet all her sex appeal and winning qualities didn't make her a bonafide star, as Warner's never quite knew how to brand her: Was she the girl-next-door? The sexpot? The sarcastic chick a la Joan Blondell? It didn't help that Ann was also picky when it came to her parts and would be constantly suspended by Warner's for refusing projects she didn't like.

As she aged through the late The '40s and The '50s, Hollywood was no longer calling, so she went to the stage and television. In the latter, she made frequent appearances in the soap operas Another World and Petticoats and Pistols.