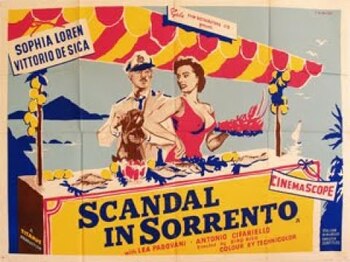 Scandal in Sorrento (Pane, amore e...) is a 1955 romantic comedy film from Italy, directed by Dino Risi and an uncredited Vittorio De Sica.

(the Italian national police) after a thirty-year career. With nothing else to do, he goes back to his hometown of Sorrento

and accepts a job as chief of the local police. Carotenuto, a womanizer but also a lifelong bachelor, goes back home accompanied only by his faithful maid Caramella.

The only problem is that his family home is currently rented by a young widow, the shockingly gorgeous Sofia (Sophia Loren). Sofia does not want to move, so despite the fact that he's old enough to be her father, she starts flirting with Antonio and leading him on in order to get him to extend her lease. Romantic complications ensue in the persons of Sofia's boyfriend Nicolino, who is none too happy with her paying attention to Antonio, and Antonio's landlady Violante, who has fallen in love with him.

Third of four Italian comedies made in the 1950s in which Vittorio De Sica played the character of Marshal Antonio.