Letting Her Hair Down 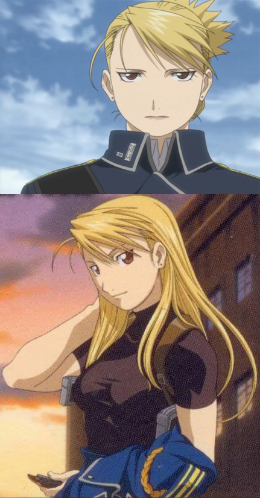 A smart, sexy asskicker.
"Do not then winde up that light
In ribands, and o'er-cloud in night,
Like the sun in's early ray;
But shake your head, and scatter day."
— Richard Lovelace, "To Amarantha; That She Would Dishevell Her Hair"
Advertisement:

Often, when a female character is particularly serious or uptight, her hair will be serious and uptight too — pulled back in a tight bun, or something of that sort. When a woman gets a love interest and starts to loosen up a little (as such characters almost inevitably do), she will start wearing her hair down, or at least in a looser style.

Unlike the hair-letting-down that is part of Beautiful All Along, this is never part of a makeover and is not necessarily commented upon by the other characters. The hairstyle in this case is more of a quick visual indicator of the character's relaxation. If the new style is noticed, there will be comments along the lines of "you should wear your hair like that more often." This is a subconscious appreciation of the heroine's new state of relaxation.

A variation of this can be seen in shows for younger girls. If the girl has low self esteem, she will wear her hair down and over her face. At the end of the show, when she has gained some confidence, she will pull her hair back to signify the change, opening her face and no longer hiding.

Sometimes the letting down is actually done expressly to make the character look more attractive, with existing admirers having their desires heightened while those who hadn't noticed them before suddenly find them to have been Beautiful All Along. This is likely related to the medieval notion that long hair was an indication of the owner's sexual prowess and concupiscence, and in fact incited others to arousal if it were not hidden, concealed, or worn up in some fashion.

A Sister Trope to Important Haircut, The Glasses Gotta Go.

Compare Slipknot Ponytail (one's hair goes au naturale because they are being badass), Wild Hair (where it is normally worn loose), Shaking Her Hair Loose (a more aggressive way of undoing hair), or Glasses And Ponytail Cover Up (which this action oftentimes follows).

Helen Lets Her Hair Down

As part of her vacation, Helen tries to invoke this. But since she has had her hair in a bun for a while, it stays in the same shape.

Helen Lets Her Hair Down

As part of her vacation, Helen tries to invoke this. But since she has had her hair in a bun for a while, it stays in the same shape.