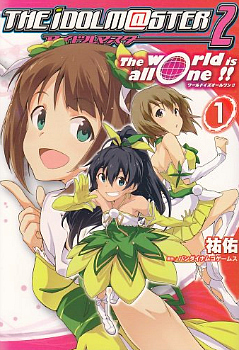 This, this is their story. A story of an idol unit and their producer. The relationship they shared might have been a little strange, but their story was, without a doubt, about "Unity".

Once upon a time there was a nameless nonentity of a man working at the idol talent agency 961 Production, doing nothing but tedious office work. That changes one day when he's sent to the office of 765 Production, a rival agency whose president his boss has a grudge against. A run-in with several of 765's idol singers and a case of mistaken identity leads to some trouble, but once everything is cleared up, our nameless protagonist is offered a job as a producer for 765 Pro! Much to his surprise his own president orders him to take the job, figuring it's a perfect opportunity to spy and sabotage his hated rival from within.

Enter Haruka Amami, Hibiki Ganaha, and Yukiho Hagiwara - the three "house sitters" of 765 Production. Despite having debuted as idols a year ago, they have no auditions, no jobs, and no popularity, and thus spend all their time at the office doing nothing. Basically as nonexistent as their new producer. For indeed, the 961 Pro spy is appointed as the producer for the three fledgling, and failing idols, with the hope that some professional management will turn their fortunes around.

It's at this point the Producer discovers that A) He does in fact make a pretty good producer and B) He finds himself growing very fond of the girls placed in his care. Together, they form the idol unit SprouT. Their optimism, dedication, and blind faith in him being able to do what they couldn't on their own, inspires him to work hard on their behalf with the hope that they will be successful. But how can he build up these young girls' dreams when at the same time his real mission is to crush them?

THE iDOLM@STER 2: The World is All One!! is an adaption of The iDOLM@STER 2, taking Haruka, Hibiki, and Yukiho as a unit, along with Producer filling in for the player. It was released in 2012 and is an ongoing series.

This Manga Provides Examples Of:

Alternative Title(s): The World Is All One