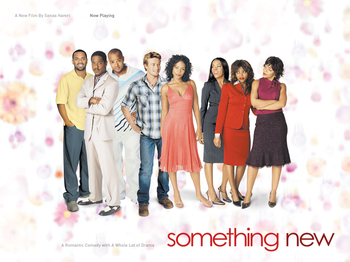 Something New is a 2006 romantic drama film starring Simon Baker and Sanaa Lathan that examines the taboos surrounding interracial relationships in contemporary America.

High-flying African-American corporate executive Kenya McQueen (Lathan) is set up on a blind date with white landscape architect Brian Kelly (Baker), but she can't bring herself to stay for the date when she meets up for the first time and realizes he's white. She meets him again, and hires him to do some renovations for her backyard where their initial chemistry turns into romance. However the disapproval of her family and the lack of support from her friends drives them apart, and she meets more acceptable, fellow African-American tax attorney Mark Harper (Blair Underwood). But something seems missing from the relationship and Kenya is not completely happy...