Western Animation / The Little Mermaid II: Return to the Sea

All spoilers for The Little Mermaid are unmarked. You Have Been Warned! 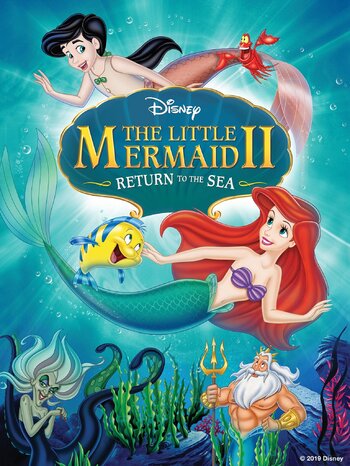 Ten years ago, a mermaid dreamed of life on the land. Now, her daughter dreams of the sea.
— Trailer
Advertisement:

The Little Mermaid II: Return to the Sea is the 2000 Direct to Video sequel to the Disney Animated Canon hit The Little Mermaid. It was directed by Jim Kammerud, with the screenplay by Elizabeth Anderson and Temple Matthews. The film was released on September 19, 2000.

Melody (Tara Strong), the newborn daughter of Ariel (Jodi Benson) and Prince Eric (Rob Paulsen), is presented to her grandfather, King Triton (Kenneth Mars). However, Ursula's sister, Morgana (Pat Carroll), tries taking Melody and using her as a hostage to gain Triton's power. Ariel decides to hide Melody from her mermaid past to prevent her making the same mistake she did.

Twelve years later, Melody finds evidence of her seaborne ancestry, and decides to go find out about it, thus playing into Morgana's plans, and forcing Ariel to become a mermaid again to save her daughter.

The Little Mermaid II: Return to the Sea provides examples of:

Melody makes a deal with Morgana to turn her into a mermaid.

Example of:
Deal with the Devil

Melody makes a deal with Morgana to turn her into a mermaid.