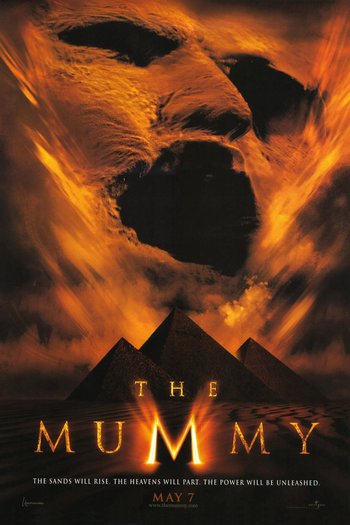 Prepare. Beware. Behold.
"Death is only the beginning."
— Imhotep
Advertisement:

The Mummy is the first film in The Mummy Trilogy. It is a loose remake of the 1932 film of the same name, but as a Two-Fisted Tales Action Horror film with a sense of humour and adventure close to the spirit of the Indiana Jones franchise. It is directed and written by Stephen Sommers, with the story by Sommers, Lloyd Fonvielle and Kevin Jarre. It was released on May 7, 1999.

Set circa early 1920s, it features proficient historian Evelyn Carnahan (Rachel Weisz) and her older brother, lazy archaeologist Jonathan Carnahan (John Hannah) on a quest to find the lost city of Hamunaptra, City of the Dead, said to be the hiding place for the wealth of ancient Egypt. Enlisting the help of former legionnaire Rick O'Connell (Brendan Fraser), they inevitably end up accidentally releasing—and then having to stop—a mummy named Imhotep (Arnold Vosloo), a former Egyptian priest who was condemned to a hellish immortality, and once awakened unleashes the ten Biblical plagues upon Egypt. Rounding out the cast is Oded Fehr as Ardeth Bey, leader of a group sworn to prevent Imhotep from being resurrected; and Jonathan Hyde as Dr. Allen Chamberlain, a British Egyptologist who participates in Evelyn's quest.

Not to be confused with its largely forgotten Spin-Off, The Mummy: The Animated Series, where Alex O'Connell appears to be aged up. Beni has been replaced by a stuffy British nerd who is otherwise functionally the same. The Bracelet of Anubis is replaced with the non-lethal Manacle of Osiris, still on his wrist, and Imhotep just will not die!

The Plague Of Flies

Following his resurrection, Imhotep is cursed to bring the Ten Plagues of Egypt with him. After assimilating the flesh of the unlucky Egyptologist, he unleashes the Plague of Flies on the heroes - and much of Cairo.

The Plague Of Flies

Following his resurrection, Imhotep is cursed to bring the Ten Plagues of Egypt with him. After assimilating the flesh of the unlucky Egyptologist, he unleashes the Plague of Flies on the heroes - and much of Cairo.