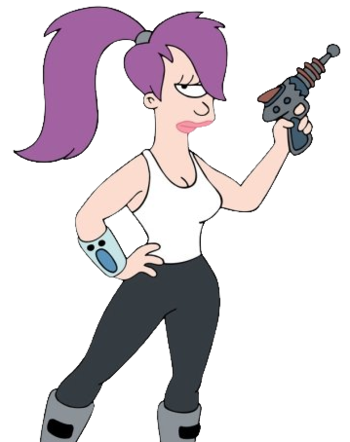 Basically using a ponytail to visually distinguish women and girls who are Tomboys, Ladettes, or otherwise don't act in a "proper" feminine manner.

This is Truth in Television for many tomboys in Real Life, due to being an easy-to-do style that gets your hair out of the way. In fiction, odds are that if a girl is wearing a ponytail (save for one paired with an elegant hairstyle), she's not going to act demure or feminine, at least not all the time. Bonus points if she wears overalls or a tank top, or is a Rebellious Princess.

Back when girls just didn't have boy hair, no matter what, ponytails were a way for tomboys to rebel against the curls their mothers wished they'd worn. This was especially the case in '60s-'80s girl empowerment fiction.

Keep in mind that since not all tomboys wear ponytails, and not all "feminine" girls avoid ponytails, there isn't much point in listing aversions to this.