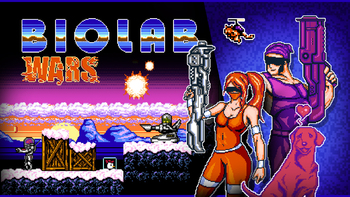 BioLab Wars is a Run-and-Gun Platform Game by 2ndBoss.

An alien spaceship has just appeared above the city. What's the government to do? Send in a team of three mercenaries to stop them, of course. So, the team (a man, a woman, and a dog in a robot suit) are sent on a mission to bring down the alien spaceship.