Video Game / The Binding of Isaac 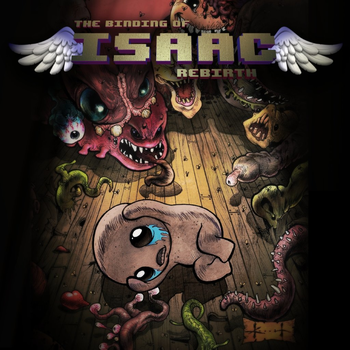 "Scrambling around his room to find a hiding place, he noticed a trapdoor to the basement, hidden under his rug. Without hesitation, he flung open the hatch just as his mother burst through his door and threw himself down into the unknown depths below."
— Intro narration
Advertisement:

The Binding of Isaac is a Horror Comedy Roguelike Shoot 'Em Up made by Edmund McMillen and Florian Himsl, released in September 2011.

The story follows Isaac, a young boy who finds himself in possibly the worst situation imaginable. After his fanatical Christian mother begins hearing the voice of God, she removes all of his worldly possessions and strips him naked, confines him to his bedroom, and unhesitatingly accepts a commission to kill him in sacrifice to prove her devotion. Isaac discovers her intentions and manages to escape into the basement, where, still naked, he goes on the run as he fights off nightmares both physical and mental (using his own tears, no less), mutates into strange new forms, discovers memories of his own past, and ultimately confronts Mom in an effort to survive.

Gameplay follows Isaac as he descends into the labyrinth underneath his house. Isaac wanders the maze that is the basement and beyond, collecting items and trinkets to slowly amass enough power to survive a confrontation with Mom and eventually greater foes beyond. The player visits item rooms to acquire powerful upgrades and faces off against a boss on every floor, heading deeper and deeper downwards with each room cleared. The game utilizes procedural generation to make each playthrough a unique experience, while additional characters themed after important people from Abrahamic myth can radically change how the game plays. Variety is the name of the game here, and the sheer volume of rooms, bosses, items, characters, secrets, challenges, and endings ensures that no two runs through the basement will ever be the same.

A remake, The Binding of Isaac: Rebirth developed and published by US-based independent game studio Nicalis, which overhauls almost every aspect of the game, has since been released on PC, Vita and PS4 on November 4, 2014. It has a rather creepy trailer

(and an even creepier one here

). Rebirth boasts a new engine, a larger development team, even more items, better synergies between said items, and more new content. Ports for the Wii U, New 3DS, Xbox One, and Nintendo Switch have also been released.

The game also has a Prequel/Spin-Off titled The Legend of Bum-bo. The basic premise of the game is a randomly generated RPG with a focus on puzzles.

Due to the surprising popularity of the game and the already large amount of content, multiple expansions have been released for both the original game and the remake:

, a card game published by Studio71, was launched, and was successfully funded. Another successful Kickstarter page was launched in June 2021 for a massive expansion with the subtitle Requiem, bringing with it the new content from Repentance as well as a plethora of crossovers with other franchises, from games like Cave Story and Among Us to even non-video-game works such as PG: Psycho Goreman and The Room. The expansion is currently planned to be released at some point in early 2023. A digital version of Four Souls is also officially available as a Workshop item

As well as all this, Isaac has also appeared as a playable character in other games such as Blade Strangers and Crystal Crisis.

Tropes found throughout the series include:

Tropes exclusive to the remake and its expansions include:

Four Souls
Dear Diary,
Today I died. I was killed by this page on some wiki. (ugly)
I leave all that I own to my pet cat Guppy. (Pretty cool stuff!)
Goodbye, Cruel World!,
-XOXO Troper
Feedback

Dogma, one of the two True Final Bosses of the game, is a monster made out of TV static that represents televangelism. It crawls out of Isaac's TV just before the fight.

Dogma, one of the two True Final Bosses of the game, is a monster made out of TV static that represents televangelism. It crawls out of Isaac's TV just before the fight.