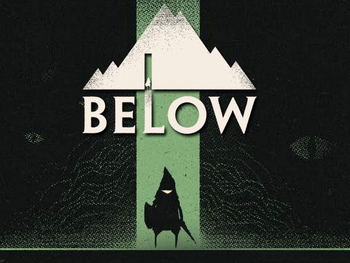 BELOW is a real-time, top-down Roguelike, developed by Capybara Games (the people behind Superbrothers: Sword & Sworcery EP and Super Time Force) over five years, and released for Xbox One and PC on December 14th, 2018.
Advertisement:

It begins with the unnamed player character sailing to a small island that's absolutely plain at first sight, but houses the entrance to a massive cave system below, which is what you are exploring. There's no words or other forms of story-telling, so you are left to take in its ominous mood. If your character dies on their way down (and they almost certainly will), a slightly different person (though with the exact same equipment) will sail to the island to try their own luck in those caves. Moreover, lighting campfires in the caves with one character will somehow allow the subsequent one to warp straight back to them.

No relation to either Lee Gaiteri's fantasy novel, or to the 2002 psychological horror film.

Tropes present in BELOW: