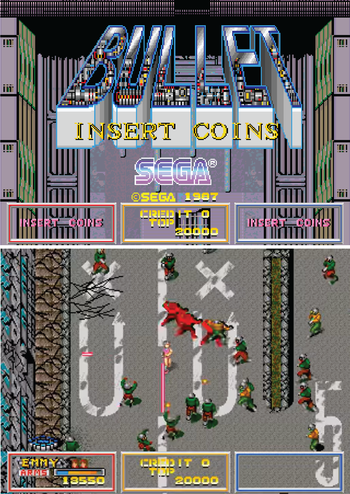 That lady in a pink leotard surrounded by mooks? That's you.
Advertisement:

Bullet is an arcade Shoot 'Em Up game released by SEGA.

In the aftermath of an Alien Invasion, the player assume controls of two commandoes, Emmy and Fred (and on 3-player mode, another guy named Chris) to clean the streets of alien forces before travelling to the unnamed alien leader's underground base, destroying all the alien lieutenants and everything in their way before the final confrontation.

The game is operated via a two stick system, for simultaneously controlling the characters and aiming shots, the latter granting an option for rapid firing. Oddly enough unlike other arcade releases at the time, continuing after running out of lives will send the player back to the start of the level.

Unrelated to the movie.