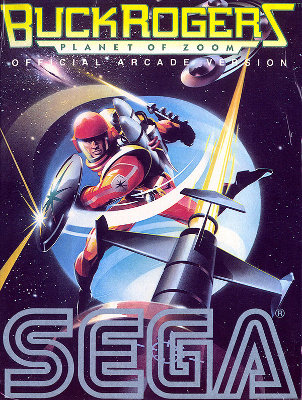 Released initially in 1982 by Sega, Buck Rogers: Planet of Zoom (also known as Zoom 909) is one of the early progenitors of "Into-the-Screen" Shoot 'Em Ups, predating not only Sega's later and more well-known titles like Space Harrier and After Burner, but also a number of other well-known shmup titles. The game was first released for the arcades

ports for contemporary gaming systems of the time. As is the case with most video games from this period, each of the ports have somewhat different game mechanics compared to the arcade game, as well from each other.

Although it's based on the venerable eponymous space opera (specifically Buck Rogers in the 25th Century), the game has no plot of its own—at least for people who don't have the arcade manual. Even then, it's rather sparse: you're Buck Rogers, and you're on a mission to stop a wandering "warrior-world" called the Planet of Zoom before it reaches Earth. Like a certain moon-sized space station, the Planet of Zoom devastates everything in its path. The Planet of Zoom is controlled by a source ship. Destroying the ship liberates the Planet of Zoom, saving Earth in the process.