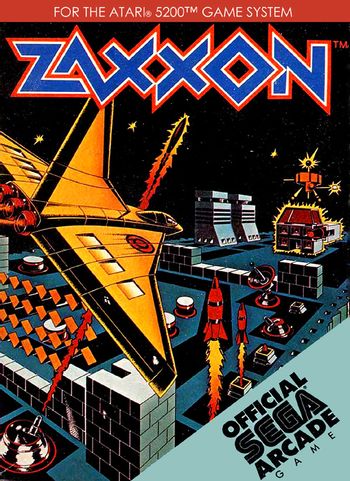 A 1982 Shoot 'em Up created by Sega, Zaxxon was the first Arcade Game to simulate a 3-dimensional view by using Isometric Projection, a form of axonometric projection (hence the name of the game). The game scrolls diagonally through enemy fortresses and outer space as the player's ship dodges the shots of enemy fighters and force field barriers, finally encountering the evil armored robot Zaxxon. Handicaps include the ship's constantly dwindling fuel supply (replenished by shooting fuel tanks), and a homing missile that will target the ship if it flies too high. The ship's altitude is indicated on a gauge and by shadows cast on the surface.

Zaxxon received multiple ports to home computers and consoles, though the diagonal-scrolling Isometric Projection was not retained in the Atari 2600 and Intellivision versions. A Mission-Pack Sequel, Super Zaxxon, was released for arcades; it replaced the robot boss with a trio of fire-breathing dragons (as well as replacing the space sequence with an underground tunnel, and generally making everything faster). Sega went on to produce two similar isometric arcade games: Congo Bongo and Future Spy.