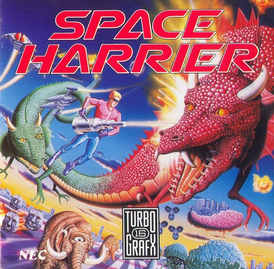 "Welcome to the Fantasy Zone! Get ready!"
Advertisement:

Space Harrier is a 1985 Sega shooting game set in the Fantasy Zone, the part that is the land of dragons.

The player controls a man with blond hair, red jacket, blue pants and a jet pack doubling as a laser cannon, who fights alien creatures while zooming towards the horizon at blisteringly fast speeds over highly colorful landscapes.

The original arcade game was built on a version of the powerful "Super Scaler" hardware Sega had introduced in Hang-On and would use again in After Burner and Thunder Blade. Considered to contain extremely cutting-edge gameplay for its time, the game was met with universal critical acclaim, but was criticized by some for its Nintendo Hard difficulty. Cited by many as the game that first popularized the third-person and rail shooter genres later adapted by titles up to and including Nintendo's Star Fox, Hideki Kamiya of Capcom and PlatinumGames fame has cited it as a major inspiration for going into video game development.

In 2000, Sega attempted a reboot with Planet Harriers, a Panzer Dragoon-like game featuring an all-new cast; this was an Arcade Game that never made it to consoles.

The game has an enduring legacy, being featured as a Game Within a Game in several other Sega games; both Shenmue games as well as Yakuza 0, Yakuza 6, and even Fist of the North Star: Lost Paradise all have playable ports of Space Harrier, and Sega Superstars and Bayonetta also feature minigames based on it. Several other Sega games pay homage to it one way or another as well.

The game is also available for download on the Nintendo 3DS via the Nintendo eShop, in the form of 3D Space Harrier. Unlike Space Harrier 3-D, which requires special glasses for the 3D mode, 3D Space Harrier utilizes the 3DS's native 3D capabilities to achieve a 3D display without the need for external peripherals. Another remaster of the game on Nintendo Switch, as part of the SEGA AGES lineup, was released in 2019, featuring motion controls and a new KOMAINU Barrier Attack mode.