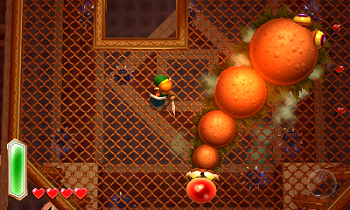 The Segmented Serpent is a snake-like or worm-like enemy which is made up of lots of individual body segments, all joined together in a line. This is a simple way to allow for interesting dynamic flexing and bending movements in a 2D sprite-based game, although the same principle can work in three dimensions as well. In its simplest form, a Segmented Serpent is simply a line of enemies following an invisible track, giving them the impression of being a larger composite creature.

This enemy type is very common in scrolling shooters. Because it normally appears in 2-dimensional games, it can often move through its own body and form closed loops to trap the player. Burrowing into the surrounding terrain and reemerging is another common tactic.

There are many different design variations on this idea, some exploiting the unique properties of a segmented creature to come up with interesting gameplay mechanics. Common ones include:

Being made of multiple sprites, Segmented Serpents are often quite large, usually larger than the player. They often appear as end of level bosses due to their spectacular appearance and their potential for interesting gameplay. They can be given weapons, but more often than not, their sheer size and dangerous movement is enough of an obstacle.

Most easy examples of this trope occurred due to graphical limitations, as a set of discrete rigid objects moving in a sequence is easier to animate than a single flexible length. Modern examples tend to be deliberate artistic choices, usually either representing mechanical or arthropod-like beings who actually look like that or as nostalgic call-backs to older games' art styles.

When a Segmented Serpent is destroyed, it's common for them to explode segment-by-segment from the point of destruction.

It is a giant sand monster Mario has to take down segment by segment.

It is a giant sand monster Mario has to take down segment by segment.