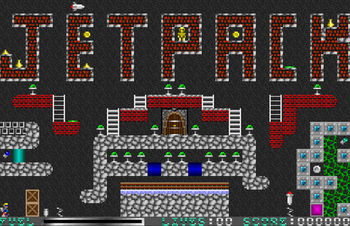 The protagonist is all the way in the lower left corner.
Advertisement:

Jetpack is a Puzzle Platformer for MS-DOS designed by Adam Pedersen. Originally released in 1993 as shareware by Software Creations, the game is now available as freeware.

The object of the game is for you to grab all the Emerald Gems in each single-screen level without getting killed by enemies or the occasional trap. To assist with this task, you are equipped with a phase shifter beam that can take out bricks (but not enemies), and, of course, a Jet Pack.

Not to be confused with the unrelated (apart from them both containing jet packs) game Jetpac.