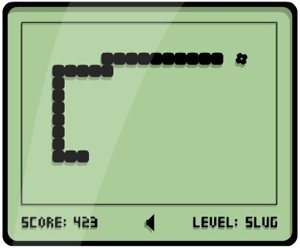 Snake is a Top-Down View Maze Game, with a twist; you not only navigate the maze, you are the maze. You play a snake, slithering around in a pit eating food. Every time you eat, you score some points, and you get longer. Eventually, you get so long that you have to navigate around yourself. The game ends when you crash into yourself or a wall.

Based on an arcade game from 1976 called Blockade. First appeared in its present form in the late 1970s on the TRS-80, Commodore PET, and Apple ][. Port Overdosed in the extreme, because both the program and the graphics are so simple. In 1997, it became the first Mobile Phone Game when it appeared on Nokia phones starting with the Nokia 6110 handset. Some versions, rather than being endless, reset the snake after eating enough food and advance to a new level, with each level after the first having pre-built walls.

if you want to give the game a shot, it is very simple: Just type 'Snake' into

Google. Trust us, you'll find it.