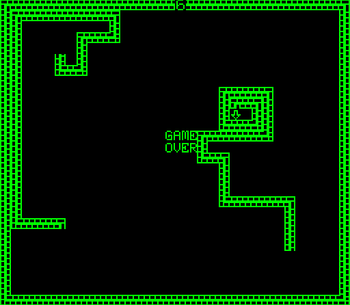 Blockade is a Player Versus Player Arcade Game from 1977, released by Gremlin. Players control the direction of two arrows moving across the screen, but can't stop them from moving. Each arrow leaves a wall of bricks behind it. The objective is to get the other player to crash into a wall, either yours, his own, or the wall surrounding the screen.

A simple game with an enormous legacy. Other companies made imitations, including one of the Atari 2600's launch titles, Surround. It inspired the light cycle game in TRON. And a one-player version for home computers, Snake, became one of the most ubiquitous games of all time.