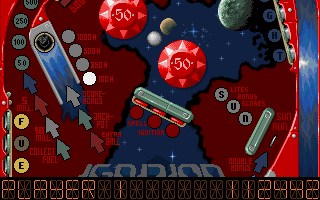 Top-down view, also sometimes referred to as bird's-eye view or overhead view, was a common perspective in video games before the advent of 3D, and is still in use in some genres today. Commonly found in Real-Time Strategy games and occasionally in Simulation Games that don't use Isometric Projection. It is also used in some Action Games, such as the early Grand Theft Auto series.

Some of these games, in addition to having the camera angled straight down, also use a perspectiveless top-down projection in which everything on the screen is viewed as if the camera were directly above it. Not everything can be drawn well in this perspective, though, which is why Cheated Angle is often applied to character and item sprites.