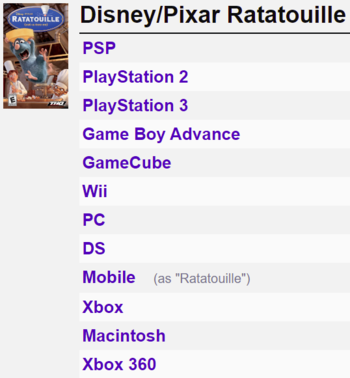 Anyone can cook, and anyone can play this game.
At the time of writing, Resident Evil 4 has been ported to 11 different gaming platformsnote PlayStation 2, Microsoft Windows (twice), Wii, iOS, PlayStation 3, Xbox 360, Android, PlayStation 4, and Xbox One and at least one kitchen appliance.note Zeebo
— Yahtzee, Zero Punctuationnote That's not mentioning the Nintendo GameCube, the platform the game was originally made (and intended to be an exclusive) for. The game also got ported to the Nintendo Switch and Oculus Quest after this, bringing the total up to a whopping fourteen.
Advertisement:

Some games are ported. A few get to the point where they can be played on virtually anything with a screen. No matter what system you own, it probably has some of these games on it. This page lists those games which have reached an absurd level of ubiquity in the video game industry, to the point where a platform's library feels incomplete without it.

All of the following games have been commercially released on at least 12 (one dozen) different platforms. The easiest way to see if a game qualifies for this page is to run it through the GameFAQs search engine

's. Also, a game's Wikipedia page will often give an exhaustive list of its ports.

Finally, do note that there's a funny line between a port, an Updated Re-release and a Video Game Remake. Particularly with 2D games, the process of redoing every sprite to work on different hardware would technically be considered a remake or a Video Game Demake these days, but is ignored here. So in most cases, all of the releases on this list came out at about the same time. For example, in the page image the Game Boy Advance version of Ratatouille is very different from the Xbox 360 one, but counts because of recency. For later releases, Updated Re-releases count, while remakes and Recycled Title examples do not because they're ultimately not the same game.