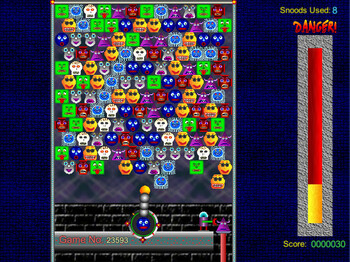 A Match-Three Game created in 1996 for the Apple Macintosh by David M. Dobson. The original version of the game featured 50 puzzles, in which the goal is to clear the board by matching three or more Snoods in the same color or shape. One could also select a difficulty level to play instead of the puzzle games.

The Snoods are Jakenote Originally Grover, for obvious reasons, Midoribe, Mildred, Spike, Zod, Geji, Sunny, and Numbskull, a skull-shaped piece which cannot be removed unless other Snoods freefall with it.

Since its creation, the game has been ported to the Intel Mac, as well as Windows, Nintendo DS, and Game Boy Advance.