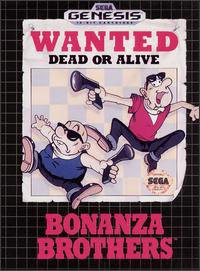 Bonanza Bros. is a Stealth Based Run-and-Gun game released in 1990 by Sega. Originally produced for arcades, it later saw a slew of home ports, including the Genesis/Mega Drive, Master System, PC Engine CD, and various home computers. The game is notable for taking the cops-and-robbers formula and flipping it on its head; here, the players are the robbers.

The exact story of the game varies between regions (and ports for that matter), but the gameplay premise is simple: Robo and Mobo Bonanza (Mike and Spike in the US Genesis version) are tasked with retrieving a set amount of items from a certain location, ranging from bags of cash, trophies, televisions, and even bombs. Each stage begins with the boys viewing the building they’ll be targeting and the goods they’ll need to steal on a projector screen, after which they break in and rob the place blind. Inevitably, these establishments are crawling with security guards itching to get their mitts on the brothers and send them up the river. Combatting their persistence will require strategy and a grain of patience, as you must take advantage of each stage’s layout, using things like the ever-trusty doors to slam the guards, and alcoves to hide in and launch surprise attacks with your stun gun. Don’t linger, though–you’ve only got three minutes to complete each job.

In 1993, the character style of Bonanza Bros. would be put to use in the Puzzle & Action series, a spin-off of sorts that consisted of wacky mini-game compilations with nods to pop culture and other Sega titles. Fittingly, the first game in that series, Tant-R, was packaged with Bonanza Bros. in Volume 6 of the Sega Ages 2500 series on PlayStation 2. It’s also been confirmed that both Bonanza Bros. and Ichidant-R will be appearing together on the upcoming Mega Drive Mini 2

The boys made a rather surprising appearance as playable characters in Sonic & Sega All-Stars Racing, driving the Get-a-Way Wagon. They were axed from the roster of the sequel, but were included as holographic statues in the final course, Race of Ages.