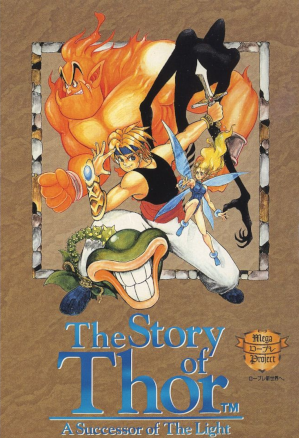 "Streets of Rage and Zelda had a daughter, and she grew up beautiful."
— James, Insert Credit
Advertisement:

Beyond Oasis, or The Story of Thor: A Successor of The Light in Japan and Europe, was an action RPG title for the Sega Genesis, something along the lines of The Legend of Zelda. The player takes control of the young prince Ali, who receives the mystical Gold Armlet at the games outset. Soon after returning home to the kingdom of Oasis, Ali finds that strange forces have invaded his homeland, and he sets out on a quest to gain the aid of the four spirits of the armlet to fight against them. The Four Spirits are Dytto, the Water Spirit, Efreet, the Fire Spirit, Shade, the Shadow Spirit, and Bow, the Plant Spirit. With their help, he attempts to challenge the forces of Silver Armlet, who uses his armlet's power to lead the invaders against Oasis. As the story unfolds, the prince discovers more details behind the origin of the armlets, the character of Silver Armlet, and the dark power the silver armlet contains.

A notable game for a number of reasons. For one, while it was quite like Zelda, one interesting difference was breakable items: if you used a weapon or item too much, it would break and become unusable. Since there was no way to repair broken items, the player is forced to try and conserve what he or she is given.

The game was followed up by a prequel: Legend of Oasis for the Sega Saturn, which is more merciful with the weapons, and adds two new spirits, Airl the Wind Spirit and Brass the Sound Spirit. Legend of Oasis focuses on Leon, the apprentice to the wizard Ordan who battles the evil Agito to become the Spirit King.