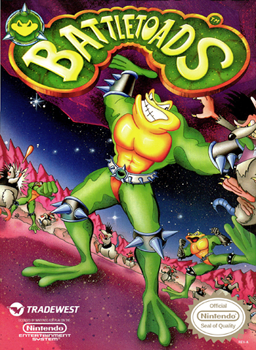 A side-scroller which hitched a ride on the Teenage Mutant Ninja Turtles craze of the late 80s and early 90s. This was Rare's first major franchise.

Set in outer space, Battletoads is the story of Zitz, Pimple, and Rash, three poorly-named heroes who battle the Dark Queen with the assistance of their Mentor, Professor T. Bird. When Pimple gets kidnapped along with Princess Angelica, Zitz and Rash rush to the rescue.

Battletoads routinely shows up in Top Ten Lists of the hardest Nintendo Entertainment System games, and is one of a few titles where 2-player mode actually makes the game harder. Contrary to reputation, it's not the most difficult game ever produced at that time (Ninja Gaiden, Ghosts 'n Goblins, Silver Surfer, and The Adventures of Bayou Billy were all keeping up); however, the amount of rote memorization demanded by Battletoads is extremely taxing on adult gamers, never mind its target audience. As the NES generation grew older, Battletoads naturally became a font of memes, to the point where the creator of I Wanna Be the Guy went on record claiming that it was a romhack of Battletoads and daring people to complete the game if they wanted to prove him a liar. The original is best remembered for its lascivious game over screen, providing incentive (or rather, two of them) for frustrated gamers to keep bashing away in hopes of meeting the Queen in person.

Nintendo Power ran a comic based on the game that was divergent in several areas, which was later used as backstory for later incarnations of the franchise. There was also a failed pilot for a Battletoads Animated Adaptation which used a notably different backstory, one derived from magazine ads which ran for the game at the time.

While the game did have several sequels (including a Intercontinuity Crossover with Double Dragon and an arcade game which played as a straight Beat 'em Up), most of these were not nearly as popular, and for the most part only the original is remembered at all. Despite the rapid downturn of popularity — but not necessarily quality — of later entries, quite a few people still want to see the franchise revived. After twenty-six years, a new entry with hand-drawn graphics simply entitled BattleToads (2020) released on August 20, 2020.

If you prefer a bit more tongue-in-cheek humor with your Merchandise-Driven game characters, see Earthworm Jim.

open/close all folders
Multiple Games / Series in General
The NES Original and its ports
The Game Boy Game
Battletoads in Battlemaniacs
Battletoads & Double Dragon
The Arcade Game
"Hello, Gamestop? Do you have a copy of Battletoads?"