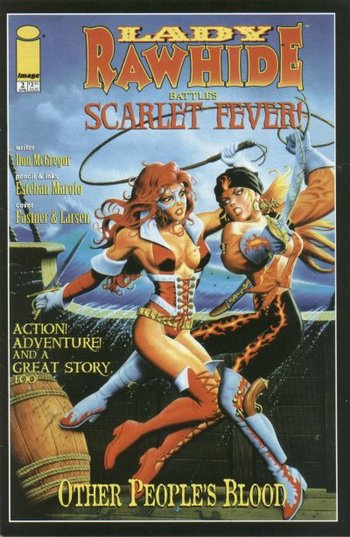 No. She hasn't contracted Scarlet Fever...
It was Richard Le Gallienne, I believe, who once observed with regret that so many available euphonious and charming Christian names for men and women have been wasted on diseases. For example, where a more agreeable sound than that conveyed by the name Catarrh Carter or Diabetes White. Assuredly no current nomenclature is so soothing to the ear. Erysipelas is a prettier name than Alice or Mable or Grace, surely; just as Tonsilitis is a smarter name than George or Henry or even Montgomery. Which is the more mellifluous: Clara Jones or Pneumonia Jones, Gustave Smith or Appendicitis Smith? Which is the more musical: Susan Jackson or Diphtheria Jackson, Jacob Robinson or Syphilis Robinson?
— George Jean Nathan
Advertisement:

Many unpleasant diseases have Greek and Latin names that might make nice names for people if not for the associations. Such associations aren't so unwelcome in broad burlesques, which is where these names are most likely to be found.

A common source of Parody Names, and target of Who Names Their Kid "Dude"?. Not to be confused with The Disease That Shall Not Be Named. Index Syndrome is an index of trope names that sound like diseases. Can often overlap with Names to Run Away from Really Fast as diseases are something that most people want to run away from. Overlaps with Unfortunate Names if the Diseased Name incurs a negative reaction.