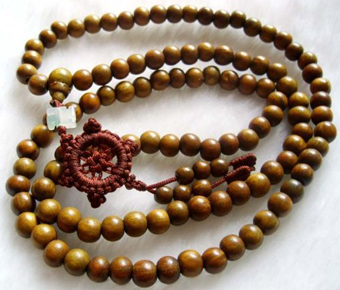 The number 108 is a significant number in the Dharmic religions, like Buddhism, Hinduism, Jainism, and Sikhism. It represents the number of temptations that humans face, which tie them to the Wheel of samsara. There are many religious elements related to this number; for example, a bell is rung 108 times to bring in the New Year in Japan, it is the typical number of beads on Hindu and Buddhist mala,note analogous to a rosary and a classic pilgrimage in Japan visits 108 temples. Also, it's 2 to the second power times 3 to the third power — obviously important.note  But 2 and 3 are the first two prime numbers... wait, 23? Oh, Crap! Doubled, it becomes 216, which is "6 by 6 by 6".