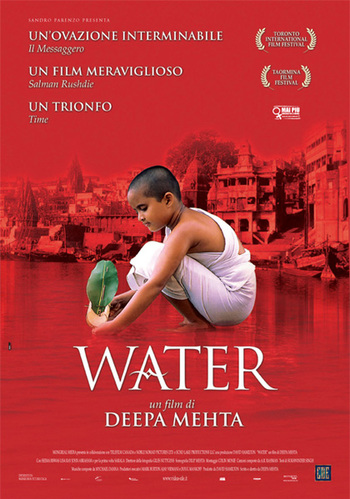 Water is a 2005 film from Canada directed by Deepa Mehta. The last installment of her "Elements trilogy", which also included films named Fire and Earth 1998.

It's from Canada, but the setting is India and the language is Hindi. In 1938 an old man dies. His 8-year-old bride Chuiya, who was married young enough that she doesn't even remember it, is left a widow. In accordance with a particularly brutal, cruel Hindu custom, she is then consigned to spend the rest of her life as a prisoner in an ashram with other widows of various ages, required to wear only white, keep a shaved head, keep a vow of chastity, and live a life of seclusion.

The ashram is a not particularly pleasant convent/prison, where the widows live in deprivation and poverty. A couple of the widows take Chuiya under their wing. One is Shakuntala, a middle-aged woman who looks after Chuiya while trying to help her adapt to her harsh new life in the ashram. The other is Kalyani, a younger, attractive widow who is the only woman in the ashram allowed to wear her hair long. Why is she allowed to wear her hair long? Because Madhumati, the older woman who has assumed leadership of the ashram, is sending Kalyani out as a prostitute.

Kalyani meets Narayan, a handsome, serious-minded upper-class student, and a supporter of the Indian independence movement and Mahatma Gandhi. Despite the social gulf between them and the religious prohibition against widows getting remarried, they get engaged. But Narayan doesn't know that his father was one of Kalyani's Johns.