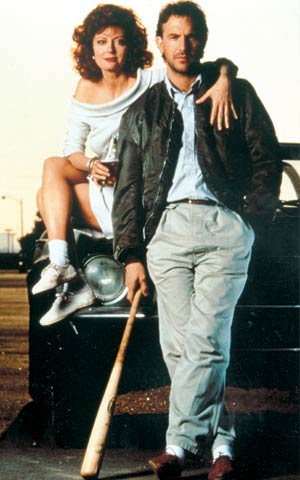 Bull Durham is a 1988 Sports/Romance comedy by Ron Shelton.

It's the Carolina Leagues and the last-place Durham Bulls are working out a rookie pitcher Ebby LaLoosh (Tim Robbins). LaLoosh has a "million-dollar arm and a five-cent head," so the ownership sends down "Crash" Davis (Kevin Costner), an aging catcher who'd been working his whole adult life to make the Majors, to teach and guide the new kid. Angry he's been sent down instead of up, Crash almost refuses to take the assignment to help the new "Meat".

Mixing into the conflict is Annie Savoy (Susan Sarandon), long-time resident of Durham and a long-time fan of baseball. A sports groupie, she takes it upon herself to latch onto a promising new talent every year and train him on the mysteries of baseball, sex and life (the coaches don't mind: every rookie she beds has a great season). She spies both LaLoosh and Crash and invites them to compete for her affections: Crash, every bit her spiritual and intellectual equal, notes he's too old to "try out" for anything and leaves her with LaLoosh by default, whom Annie quickly beds and nicknames "Nuke".

Now with Crash and Annie teaching him - sometimes in conflict, but more often than not in concert - Nuke goes through the trials and errors of a pitcher: knowing when NOT to shake off a catcher's sign, the value of a rain-out, how bondage and poetry improve sex, how to hold a ball like an egg, how NOT to think when pitching, how to have actual fun during a game, and which way a garter belt ought to be worn ("Rose goes in front, big guy.") But while all that's going on, Crash and Annie get to realizing that the two of them might be perfect for each other, except that she's with Nuke...

Critical reception for Bull Durham was mostly positive when it came out and was a moderate success, but in the years since its release the film has been re-assessed as a full-out classic among sports film: critics, sports columnists, and baseball fans argue it may be the best baseball movie ever. The film also made the Durham Bulls, now a Triple-A team, one of the best-known minor league teams in the United States.

Costner's next film would be another iconic baseball film, Field of Dreams, while the Bulls themselves, along with their major league partner the Tampa Bay Rays (then the Devil Rays) would feature in yet another baseball film, 2002's The Rookie.

This movie contains examples of baseball and sex, and a few of these tropes: