The Art of Bra Removal 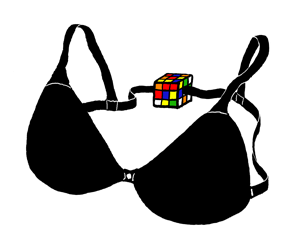 "Don't worry, I can do it in under a minute."
"Yes, I've noticed."
"You just twist your hand until something breaks."
— Michael Scott of The Office explains his technique.
Advertisement:

Many men have a lot of trouble unhooking women's bras from the front.

Humiliatingly enough, it often turns out these guys' worldly, swinging compatriots are able to unhook a girl's bra blindfolded, upside-down and with their teeth in two seconds.

Truth in Television for a lot of guys. While most bras really are easy enough to undo one-handed, it's understandable why some have difficulty. When you consider lack of experience, understanding or the proper technique, worrying about this trope, being unable to see what they're doing and either so nervous, excited, embarrassed or eager that shaking uncooperative hands aren't out of the question, it's not surprising that many people may have experienced this, particularly their first time. Maybe she could just do it herself. Or, perhaps, buy a bra that hooks from the front.

Interestingly, while most women soon learn to unhook their own bras easily enough, when it comes to manipulating the bra of another woman, or the hooks of a bra still in its package, they often have more trouble. Some women can only do it with their eyes closed, working by feel alone.

In fiction, this frequently proves to be a Moment Killer, because people are incapable of laughing off minor embarrassments.

That said, it is actually fairly intuitive (bra manufacturers would go out of business if they weren't), so No Real Life Examples, Please!.