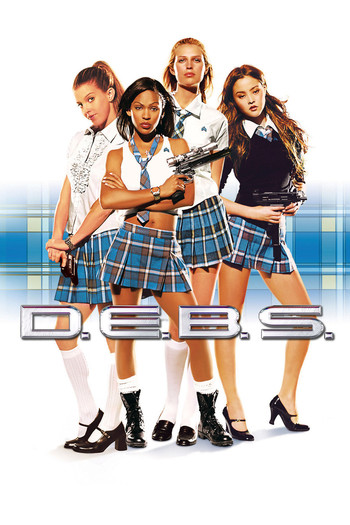 "Evil is so totally busted."
Advertisement:

D.E.B.S. is a 2004 action comedy film based on a 2003 short that made the rounds at the film festival circuit. The short was about a team of college girl spies and the romantic relationship of one of the spies with the archvillain. The film expands on the story of the short and adds a fair dose of camp.

The D.E.B.S. are a large group of young women who are super spies. They are first screened by a secret portion of the SATs that test whether someone has the aptitude to lie, cheat, fight, and kill. Those who pass screening are recruited into the D.E.B.S. spy academy.

The plot begins with one of the squads being tasked with staking out villainess Lucy Diamond. One member of the squad, Amy, has always been fascinated by Lucy Diamond and is even writing a thesis on her. The stakeout goes wrong and it ends up turning into a gun fight. Just afterwards, while chasing Lucy, Amy and Lucy end up meeting face to face. Despite holding each other at gunpoint, Lucy and Amy start talking to each other. After a distraction helps Lucy escape, it's revealed that Lucy is starting to really fall for Amy...

Despite taking place in a Charlie's Angels-style spy universe, D.E.B.S. is actually more of a Yuri Romantic Comedy than anything else.

Not to be confused with the Delfino Emergency Broadcast System, or Eugene Debs.