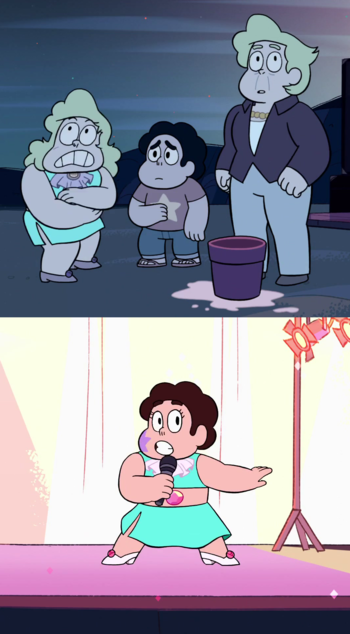 The Wholesome Crossdresser may be of any sexual orientation, but in settings where being straight is considered part of being "normal," one can expect to see the character's heterosexuality explicitly highlighted.

Some permutations of the trope are more or less unique to Japanese works. The Japanese Wholesome Crossdresser is usually well-groomed, compassionate, nice, and above all, so convincing that their sex is only mentioned on occasion, as a reminder to newer members of the audience. There's a fair chance someone will get a crush on them, although this is usually resolved after The Reveal.

The opposite of Creepy Crossdresser. May overlap with Disguised in Drag or its Distaff Counterpart, Sweet Polly Oliver. (If the character wears cross-dressing disguises more often than seems strictly necessary, this trope may apply.) Wholesome Crossdressers tend to enjoy dressing, even if only reluctantly, secretly, or subconsciously.

Often overlaps with Drag Queen (a campy, hyper-feminine form of expression with heavy ties to gay/bi male culture), but usually doesn’t with being Transgender (an intricate subject that is more connected with inward identity than outward appearance).

Compare Otokonoko Genre, which is about male crossdressers (and occasionally Transgender women), that are almost always presented as wholesome.