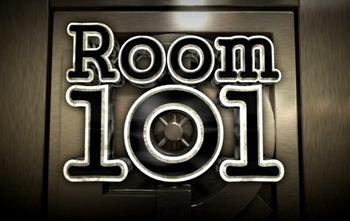 Even celebrities have pet peeves.
Room 101 is a BBC comedy show that has been running on-and-off since 1994, named for the Room 101 from the novel 1984, which itself was named after a conference room at Broadcasting House, the BBC's headquarters.
Advertisement:

It was first hosted by Nick Hancock (1994-97) and succeeded by Paul Merton (1999-2007). During this period, it was a chat show where that week's featured guest nominated some of their pet hates (people, objects, experiences, whatever) and argued why they should be consigned to Room 101; the host then had to decide in each case whether or not they had made a persuasive argument. If so, the item got condemned and placed into Room 101; if not, the guest had to take it home with them.

In 2012, a revamped edition hosted by Frank Skinner began, with the programme now taking the format of a Panel Game, with three different celebrity guests arguing across a series of categories to try and get their chosen items into Room 101; only one guest's item in each category is consigned, with Frank being the adjudicator at the end of each round. Series 5 of this revamped edition ditched the categories and placed no restrictions on what could be entered into the vault. As with many British panel shows, it's largely used as an excuse to rant about whatever the guest brought in.

The show is normally 30 minutes long, with an "Extra Storage" episode running for 45 minutes that has more jokes and an extra round, which airs the following day (and fixes the weird Plot Hole of a celebrity winning after only two rounds). Like with Top Gear and QI, the show is often repeated on Dave. In 2018, Skinner revealed that the show has been cancelled.

As mentioned above, don't confuse the show for the trope Room 101, despite the show using it as the roots of inspiration. Also, don't confuse it for the Subject 101 trope (which is about introductory study courses that anyone can do), the TV series Room 104 (an unrelated mixed-genre anthology series set in a hotel room), or the unrelated videogame Pirate 101 (which is an MMORPG about pirates), though in theory, all of these could be put into Room 101 if a celebrity hated them so much.