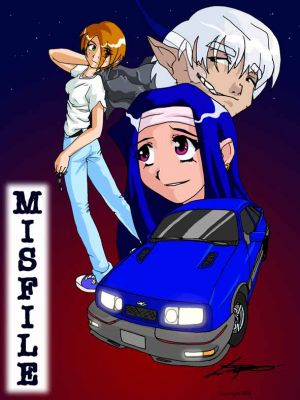 The three main characters.note Clockwise from furthest left: Ash, Rumisiel and Emily.
"In one little corner of the universe, there's nothing more irritating than a misfile..."
Advertisement:

A webcomic by Chris Hazelton, Misfile

) is the story of "a girl who was a boy, a Harvard-bound genius missing two years of her life, and the pot-headed angel who did it to them" via a celestial filing accident. In the small hillside town of Tempest, Massachusetts, boy racer Ash was turned into a girl, studious Emily had the past two years of her life erased — including her admission to Harvard — and angelic loser Rumisiel was exiled to Earth for his incompetence. Fortunately, due to a side effect of the accident, these three can still remember the universe-as-it-was. Lucky, because Rumisiel fears his superiors would likely 'correct' the misfile by making it permanent.

Mixing street racing, girl-bonding, and car tuning sessions with angels, supernatural weirdness and the trials and tribulations — from getting hit on by guys to bras — of a boy suddenly transformed into a girl, Misfile defies simple categorization as the two protagonists struggle to deal with the craziness that has taken over their lives while trying to get Rumisiel back into heaven so he can fix his mistake. Complications arise, of course, not the least of which is Rumisiel's perpetual slacker nature.

The comic is notable for dealing with a Gender Bender plot in a much less Fanservice-ey way, and with much more emotional depth and serious character consideration, than is the norm. Essentially, if you left out the supernatural and fantastical elements of the story, you'd still be left with a good tale about the challenges faced by a transgender boy dealing with life in a girl's body. Also unusual is the fact that the "old universe", where Ash is a boy with emotionally-distant parents and Emily is a college-bound senior with a mean streak, has literally never been seen in the comic, although it's often alluded to.

On January 12, 2021, a new epilogue called "Misfile: Next" was announced on Kickstarter. This new comic will detail the events between Rumisiel's slap dash repair of the original Misfile and the "Where Are They Now?" Epilogue.

The second story, Misfile Universe- Hell High, takes place in the first circle of Hell. The story follows Aiden Blackwell and his sister Carly, who are the first humans born in Hell when souls became fertile. Negotiations were made: if the souls can graduate from a specialized school, they get to live on Earth. If not, they're stuck living in Hell. Most notable is that none of them existed until the end of Misfile. They are also joined by Nil, a girl with horns who is found floating face-down in the river Styx. Hell High expands on the Misfile universe and explores concepts, characters and creatures that were only mentioned in the original series.