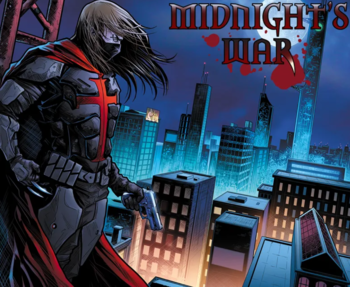 Midnight's War is a weekly webcomic by Vox Day published on his comics website, Arkhaven

In the year 8466 of the Cainite Calendar, in the wake of a massive global financial crisis, vampires emerge from the shadows to assume total control of society, through their subversion of the banks, national governments, the media, and many international institutions. Now ruling openly, they have no reason to hide their thirst for human blood, demanding a yearly tax to quench their desires.

Originally created as an entry for a short story contest on Webtoons, Vox decided to take it down and reupload it, feeling that it wasn't suited to Webtoons' primary demographic. The entire series can be read for free here.