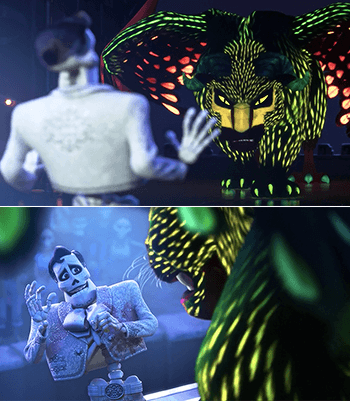 Yes, she is...but you pissed her off.
Advertisement:

Every now and then the hero runs across a big animal he would rather not disturb. It's a bear, or a tiger, or Cerberus.

Correct procedure is to back away slowly, making placatory sounds such as "Niiiice kitty... good kitty...", and then run just before the pounce. A Fluffy Tamer may stand a better chance of getting this to work than the average person.

Occasionally the Kitty turns out to be an actual Nice Kitty, and acts like a giant kitten.

Contrast Scare the Dog for occasions when the hero responds by getting louder and more intimidating rather than trying to placate the animal with soft noises.