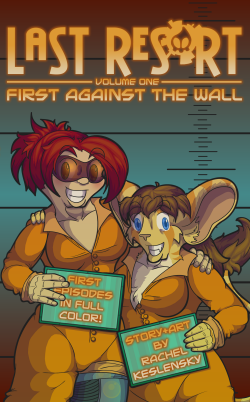 "It's not about how it starts feeling normal.
It's about how you stop feeling helpless."
Advertisement:

features a Rogues Gallery of Condemned Contestants along with some volunteers who signed up for the ride. If they want to earn their freedom (or fame and fortune, in the case of the volunteers), they'll have to survive the season.

There's Loads and Loads of Characters, but the comic's main focus is on the show's pair of Lovely Angels: Jigsaw, a furry violinist turned vampire (the only nonhuman vampire in the galaxy, in fact), who signed up for the show to save her friend, Daisy, a Mad Scientist CEO with a robotic leg.

Several subplots brew underneath the surface of the reality show, currently centering on Jigsaw and her latent vampire nature (and the trouble that could stem from it), not to mention:

The comic itself is surprisingly well done, working months in advance to avoid Schedule Slip (although at a comic a week, it's arguably a little slow-paced).

The first few years' worth of comics have been compiled into a Trade Paperback, available here

. There's also an RPG in progress, the beta of which is available though signing up for the mailing list

, and contains some additional info not included in the comic itself.

A kickstarter to put volume 2 in print has been funded.

— and more books are on their way!

There's also a Character Sheet. It needs a lot of work.

Not to be confused with the popular song by Papa Roach, the Neo Geo game, or the Last Resort military drama on ABC.

Unfortunatly the webcomic has not updated since December 2020.

Tropes featured or appearing in this work: