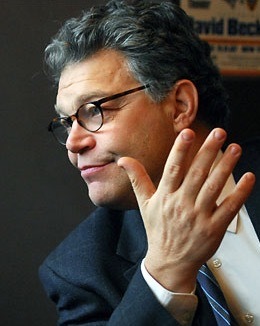 No, this isn't Lewis Black.
Advertisement:

First known as a writer and bit player on Saturday Night Live in the 1970s with fellow writer Tom Davis, Franken left the show after it changed producers in 1980 but returned five years later along with Lorne Michaels, helping contribute to its resurgence over the following decade. (Franken is SNL's longest-running feature player who was never promoted to cast member as of 2011.) A film based on his recurring Stuart Smalley character, Stuart Saves His Family, was released in 1995 and flopped. In the late '90s he became a bestselling author, with a strong liberal political bent. He also appeared in a few other (largely forgettable) films, and hosted a radio Talk Show on the short-lived Air America network.

In 2009, he became the Junior Senator from Minnesota in a very close, frighteningly protracted election

. His re-election in 2014 was more of a Curb-Stomp Battle, in which he defeated his opponent by ten points. Interestingly, as a Senator, he was rather mild-mannered, level-headed, and kind of sheepish. Didn’t stop him from making frequent jokes, though.

Oh, and he can freehand draw an accurate map of the United States of America (mostly the continental 48) from memory (a skill he once displayed on a late-'80s Saturday Night Live episode, showing then-Weekend Update anchor Dennis Miller where the electoral college votes would be for the 1988 election).

He's also really fast with a gun. Freakishly fast. In fact, he is an acknowledged quick draw champion and once claimed to be the third fastest in the U.S.

In December 2017, due to claims of sexual misconduct, Franken announced his resignation from the Senate, before formally resigning on January 2, 2018.note and yes, SNL did make fun of that, though not as savagely as one would hope

Tropes associated with Franken include: