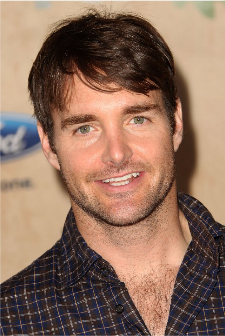 Will Forte (real name: Orville Willis Forte IV, born June 17, 1970 in Alameda, California) is an American actor and writer who got his start on The Late Show with David Letterman. After moving to Los Angeles, he eventually got a cast spot on Saturday Night Live, where he stayed on the show from 2002 to 2010, playing offbeat and very disturbing characters, such as Jeff Montgomery, a friendly sex offender/mental patient, The Falconer, a businessman who abandoned his upper-middle-class life to live in the woods with his falcon, Donald, and soft-spoken, corrupt politician, Tim Calhoun). His most popular character, MacGruber, a parody of MacGyver, received a spin-off film MacGruber in which he starred. Forte's notable celebrity impressions include George W. Bush (when SNL was trying to find a replacement for Will Ferrell. While Darrell Hammond's and Chris Parnell's impressions weren't warmly received, Forte's was considered the closest to Ferrell's), Benny Hill, Caitlyn Jenner, Willie Nelson, Greg Allman, George Soros, Macaulay Culkin, Ghyslian Raza (the "Star Wars Kid"), and even Lorne Michaels himself (back when Lorne Michaels actually had color in his hair and didn't wear suitsnote the 1970s, when SNL was just starting out).

He voiced the key character of Clone High, Abraham Lincoln, as one of his first major roles in a TV series. Then went on to play recurring characters such as Paul L'Astnamé in 30 Rock and Randy Wharmpess in How I Met Your Mother, and he has garnered numerous recurring cameo roles in TV series, such as Principal Wally Farquhare in The Cleveland Show, "Ass" Principal Stuart Proszackian (and former prison entertainer) on the short-lived Sit Down, Shut Up, Tyler the Cute Biker in Gravity Falls, Stuart Rossmire in Allen Gregory, and Rad Cunningham in Moonbeam City. In 2015, he began starring in a series of his own, The Last Man on Earth. In 2021, he stars as Wolf Tobin in The Great North.

Forte made his film debut in Around the World in 80 Days (2004). Though he mostly plays mostly comedy roles, he can pull off some dramatic acting skills when necessary, as evidenced in the 2013 film Nebraska. He's also been featured in movies like The Watch (2012) and The Brothers Solomon (the latter of which he also wrote) and makes frequent cameos on the big screen too, like Joe Towne in Cloudy with a Chance of Meatballs and Abraham Lincoln in The LEGO Movie.

Tropes associated with Will Forte