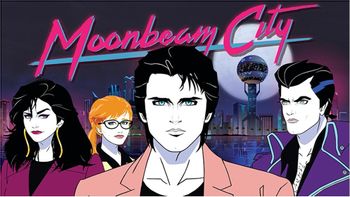 A 2015 animated series on Comedy Central detailing the illustrious and ill-advised misadventures of Dazzle Novak (Rob Lowe), an egotistical and easily-distracted detective of the eponymous city's Police Department. He is, however, Moonbeam City's top cop; which partially explains why his beloved metropolis is plagued with rampant crime and corruption. Working alongside (or more often against) Dazzle in his cases are his assistant, junior cop/tech genius Chrysalis Tate (Kate Mara), his police chief (and part-time lover), Pizzaz Miller (Elizabeth Banks), and his envious fellow officer/rival, the childish and clumsy Rad Cunningham (Will Forte).

With an art style inspired by both tech artist Syd Mead and late pop artist Patrick Nagel, a Synth-Pop soundtrack, and an ethos drenched in the nouveau-vice trappings of The '80s, Moonbeam City oozes style (and other, less savory, fluids) in this high-action police comedy-drama gone wonderfully, terribly wrong.

The show was not renewed for a second season, due to low ratings, and was cancelled. It is now one of Comedy Central's shortest lived animated series.