Surveillance as the Plot Demands 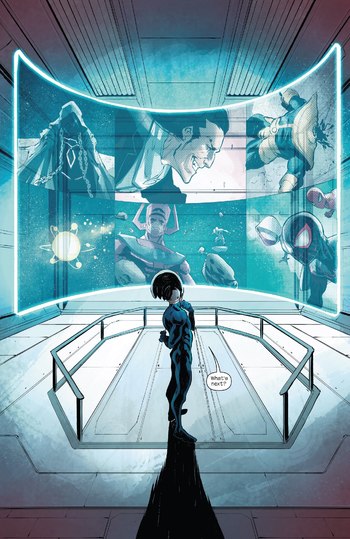 Infinity Wars, Namor's war against the surface world, Spider-Geddon... The Maker can watch it all!
"Lex Luthor had cameras everywhere. It didn't matter if Jayna was on the toilet or if Superman was 3 galaxies away enjoying a bowl of cereal, Lex Luthor could put it up on the big screen if he wanted."
— Seanbaby, on Super Friends
Advertisement:

The bad guys have cameras everywhere. They probably also have Ominous Multiple Screens to follow all those cameras. Like some even-more-sinister version of Big Brother, they always know exactly where the heroes are and what they're doing, even if there's no possible reason for them to be able to. It doesn't matter if they're three galaxies away or five thousand years in the past, the villains can still find them. They can put anything that they want up on the big screen, making you wonder why they don't just give up on the bizarre plans for world domination and just surreptitiously blackmail every government in the world without the good guys ever finding out. Or at least you would if you weren't so busy trying to puzzle out exactly how Luthor managed to get a live feed of the Super Friends repairing satellites in outer space.

The Omniscient Council of Vagueness will often make heavy use of this trope — this trope is primarliy used to keep the villains and their Plan up-to-date on the situation. Heroes or antagonists savvy to this will give them a Poke in the Third Eye to escape detection.

Incidentally, magical versions of this trope (Crystal Balls, Magic Mirrors, etc.) are a little more sensible, being one of those tropes that's so unlikely that A Wizard Did It becomes the most plausible explanation.

See also Big Brother Is Watching for the dystopian version. Not to be confused with Magical Security Cam, which is when the surveillance footage is recycled from elsewhere in the show. Also compare Convenient Photograph, which is a case where something specific gets caught, often improbably, in a picture, but it may or may not be as a result of this trope.