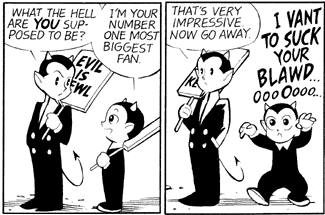 A nut who follows the main characters everywhere out of obsessive admiration, either causing trouble or just creeping them out. Extreme loony fans may go to great lengths and evil deeds to "help" the hero they idolize. They take their eventual rejection very personally. Occasionally this character will really go off the deep end and attempt to replace their hero.

This can also overlap with the Straw Fan, The Collector, Yandere, Shipper on Deck, Poisonous Friend or Stalker with a Crush.

Sad (and a little scary) to say, this is very much Truth in Television.

Cricket encounters Zillon Brax's craziest number one fan who vows to keep him as her singing partner forever.

Cricket encounters Zillon Brax's craziest number one fan who vows to keep him as her singing partner forever.