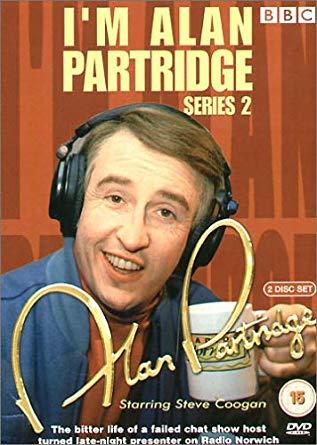 1997-2002 Brit Com starring Steve Coogan as Alan Partridge, a failed chat show host. An utterly loathsome, pathologically narcissistic and self-absorbed failure of a human being with a permanent sneer, a wardrobe of Pringle jumpers and a fascination with 'ladyboys', Partridge, after a failed chat show in which he failed to get an appearance from Roger Moore, shot a guest dead, and punched his BBC boss with a partridge (Knowing Me, Knowing You with Alan Partridge), is reduced to the graveyard shift on local radio and living in a motel after being kicked out by his wife. The series took a close look at Partridge's life (such as it was) and his increasingly desperate attempts to get back on television. A second series was broadcast in 2002, which showed Partridge — following an off-screen nervous breakdown — as slightly more successful and a lot more smug. Other important characters include:

This is the role for which Steve Coogan will forever be remembered, and rightly so; one of the best British sitcoms ever made. Came forty-second in Britain's Best Sitcom.