Radio / In and Out of the Kitchen 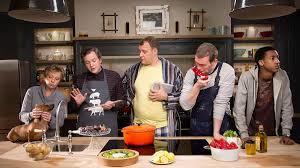 A radio sitcom for The BBC. It follows the exploits of cookery writer Damien Trench (Miles Jupp), who writes with a serene eloquence about expensive food. However, his life is in contrast with his serene writings, as Damien is neurotic and anxious.

Damien lives with his partner Anthony (Justin Edwards). They are currently having building work done by their wise Irish builder, Mr. Mullaney, and his assistant Steven.

Damien has a love/hate relationship with his agent Ian, who often calls to make demands of Damien.