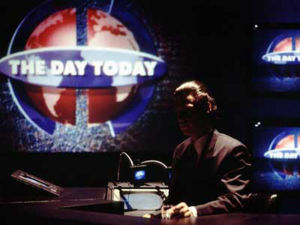 The brainchild of a number of British comedians including Chris Morris and Armando Iannucci, The Day Today was a critically-acclaimed satire of every aspect of British TV news shows. Adapted from the 1991-92 radio program On the Hour and featuring many of the same writers, The Day Today was broadcasted as a series of six half-hour episodes from January to February 1994, on BBC2. The show's M.O. was to present meaningless reports such as the London Underground infested with horses, or the IRA planting bombs inside stray dogs, in an absolutely deadpan style so that anyone channel-hopping would not be sure for a split second if what they were watching was real.

While the subjects of the stories were absurd, the methods used to tell them were dead-on parodies of British news tropes at the time, from nonsensical graphs and pointless computer animations to newscasters creating tortuous metaphors and wordplay to add credibility to their stories. It still holds up surprisingly well today, partly because they had five months to create six episodes and so could really go overboard on creating pompous and overlong computer animations for the most trivial of reasons, which years later real news programmes would begin do every day as computer power increased.

", who had an unquenchable lust for News with a capital "N" and a sneering demeanour that was blatantly ripped off of British journo Jeremy Paxman; Peter O'Hanraha-Hanrahan

, who made up for in tenacity what he lacked in... everything else; Alan Partridge

, who was forever reporting on the multiple executions of killer Chapman Baxter.

Occasionally the show would break for a parody of MTV, sensationalist American news or tedious British soap operas, but its primary focus was on skewering the news media.

Despite its acclaim, the show is still best known for bringing Steve Coogan's Alan Partridge, the socially inept sports presenter, to TV; he later appeared in a number of spin-off projects, the most well-known of which are Knowing Me, Knowing You with Alan Partridge and I'm Alan Partridge. It was followed by Brass Eye, a pseudo-spinoff written entirely by Morris that used some of the same characters but this time punctured the Prime Time News format.