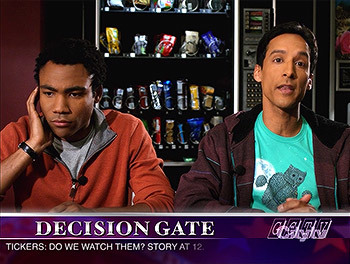 Found on 24-Hour News Networks, such as CNN, this line of scrolling text provides viewers with the headlines while they are watching a report on, say, tax evasion. Also called a news ticker.

Any spoof of a news report is almost guaranteed to have a silly headlines populating this bar for the entire time for bonus jokes, which often requires one to rewatch the scene twice to catch everything. Said headlines may or may not be about a Noodle Incident.

While these seem fairly ubiquitous now, the idea of a 24-hour news crawl on the screen didn't become popular with many television news networks until after September 11th, 2001. Prior to this, a few networks did run constant crawls, but mostly with stock information, sports scores, or weather updates.