Series / The Chaser's War on Everything 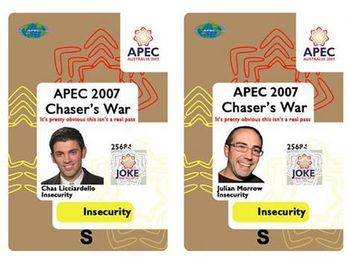 This will get you into the red zone at APEC
.
"Being offended by The Chaser is like going to a strip club and being offended by the nudity."
— Julian Morrow
Advertisement:

The Chaser's War on Everything was an Australian half-hour comedy show produced and broadcast by The ABC (the Australian one) and hosted by funny-men Andrew Hansen, Chris Taylor, Chas Licciardello, Craig Reucassel and Julian Morrow, collectively referred to as The Chaser.note Members of the team not usually mentioned are Dominic Knight (who prefers to remain behind the scene as a writer) and Charles Firth (who went solo in 2007). The show has aired in many countries across the world, from Israel to the UK, Poland to South Korea.

The Chaser began as creators of a satirical newspaper, called The Chaser (not dissimilar to The Onion). After a slow start, sales skyrocketed when they published then Prime Minister John Howard's phone number. This got the attention of Australian interviewer and TV star Andrew Denton, who got them a spot on the ABC, Australia's government-funded network; the result was The Election Chaser, a short series covering the 2001 federal election and taking the piss out of everyone involved. They then went on to do the news parody show CNNNN (Chaser Non-stop News Network), mostly mocking CNN, Fox News and Australian current affairs. They followed this with more coverages of elections, a stage show, and then their most famous work: The Chaser's War on Everything.note Rejected names for the show include Hey Hey It's The Chaser, The Age of Terror Variety Hour, Thank Allah It's Friday and The Chaser is Right.

The show was more relaxed than CNNN, extensively used parody and satire, and they didn't pull any punches either. The Seven Network and the Nine Network, both the 'big' commercial stations in Australia, were frequently poked fun at, particularly with regards to their dubious current affairs reporting. They also mock the ABC, which doesn't seem to mind them poking fun at or criticising material produced or transmitted by them. (This is probably because the ABC is entirely government-funded, so there are no sponsors to offend.)

The Chaser's stunts have gotten them into trouble a few times, culminating in an incident during the APEC (Asia-Pacific Economic Cooperation) being held in Sydney in 2007: despite their expectations that the stunt would go no further than the outer boundary, their fake motorcade entered the Red Security Zone (the highest level security zone), despite having 'FAKE' and 'This is obviously a joke' stamped on their "passes", and with a person dressed as Osama bin Laden in one of the vehicles. Chas, Julian, and a number of the crew for the show got arrested. It was this prank alone that started international buzz and later a bidding war for American syndication, eventually won by G4TV in late 2008.

It returned to air in 2009, this time with only ten episodes. Only two episodes in, it caused controversy over a sketch about terminally ill children. This also led to questions about whether it has jumped the shark. In case you were wondering, it didn't; they even managed to handle their own shame in a funny (but in no way disrespectful to the victims) way. This turned out to be their last season, for several reasons - among them, they were getting too easily recognised by the public and so, couldn't pull fast ones on them. They spent 2010 touring Australia with The Age of Terror Variety Hour. They also covered the 2010 Australian election with their mini-series Yes We Canberra. This was the first time their election coverage was actually watched by anybody - the previous years it was held a week before the election was held, and the week after it was over. They covered the 2013 election with The Hamster Decides, a five-episode series which turned out to be just as popular as Yes We Canberra.

They planned to return to television in April 2011 to cover the royal wedding of Kate Middleton and Prince William - In their own words, it was to be "uninformed and unconstitutional" - but the BBC and the royal family put a stop to that a week before the wedding by amending the licencing terms of the wedding broadcast to prevent usage of the footage in comedy. No-one was amused.

In 2011, the Chaser team returned with their new show The Hamster Wheel, a (relatively) low-key version of The War with more of a focus on discussion of politics and modern media rather than attention-grabbing stunts like APEC. Following the conclusion of The Hamster Wheel's first (but not only) season, members of the Chaser have gotten involved in other projects across the ABC - Chas Licciardello is currently an anchor of Planet America, an ABC News 24 program discussing American politics, and most of its members sometimes sit on the panel of The Drum, ABC News 24's news analysis and debate program. In 2013, Craig and Julian went on to co-host The Checkout, a consumer affairs show which went on to become an unexpected hit, netting 1.2 million viewers an episode by the end of its run on the ABC (often beating out rival network Ten for the timeslot), with Chas on board as Producer and Script Editor.

Clips from The Chaser's War on Everything are extremely abundant on YouTube. The ABC has a policy of allowing its content to be freely available, and so is more than happy to leave them be. In addition, the Chaser has a YouTube channel

, which in addition to exclusive content contains clips of a majority of the content of The Hamster Wheel.

Brief descriptions of the main guys:

(For the Korean film which shares its name with the group, see The Chaser)

The Chaser's War on Everything and other works by the Chaser provide examples of: