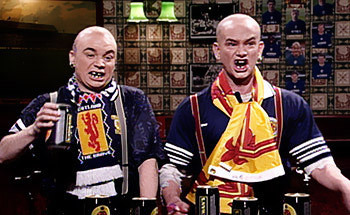 "They call this a soccer riot? Come on, boys, let's take 'em to school!"
— Groundskeeper

An Association Football supporter who arguably takes the "support" part more seriously than the football. Portrayals (and Real Life examples) tend to range along a sliding scale of criminal behaviour. Some are fans who've gotten drunk and found themselves in a Bar Brawl, while others are organised "firms" — gangs formed on the basis not of ethnicity or home turf, but of the members' favoured team.

Hooliganism bears a similarity to Fight Clubbing in spirit, in that rival firms usually stick to beating each other up. However, as it takes place in public and is often backed up by tribal loyalties and strong emotions, it can easily escalate into armed battles, property damage, fights with police, and stampeding civilians — it's basically a Powder Keg Crowd set off by football.

It's widely thought of as a very British trope, but hooliganism in football

(and other sports) is prevalent around the world (even in the United States) — and as far as football is concerned, there are some very wild Ultras in Spain, Italy and most Eastern European countries. That said, football hooliganism has been a scourge on British public life for generations, and it remains a defining British characteristic for foreigners (particularly Americans). The specific British tropes related to the phenomenon are the London Gangster and The Yardies, groups which can overlap with hooligan populations. Scotland adds another dimension with the Violent Glaswegian being part of the particularly violent Celtic-Rangers rivalry.